It was an historical day for Tecnam and for the P2012 program when the first two Traveller aircraft were ready to depart Tecnam headquarters in Capua, Italy, and wing their way across the world to Massachusetts, US.

With this ferry flight to the first customer, the P2012 Traveller is officially born and in service. These first two aircraft represent the first batch of the 100 Travellers ordered by Cape Air as a result of a thorough and intensive development process in conjunction with Tecnam.

A ferry flight across the Atlantic takes more than a safe, reliable aeroplane. It also takes skill, confidence and a great deal of experience. So, when Tecnam needed a crew to fly these first two P2012 Traveller aircraft from Italy to the US, who better to take on the task than the Managing Director himself?

Grandson of the founding brothers, 28-year-old Giovanni Pascale stepped up to the role of Pilot in Command and successfully led his crew on this 4,000 NM journey, which took only three days to complete. He ferried one of the P2012 Travellers together with Co-pilot Elio Rullo, while Capt. Vito Preti and Technician Antonio Covino flew the other. There may have been just four crew members on board, but to these men it seemed that, spiritually, the entire Tecnam team had accompanied them on their journey, staying in close communication at all times, and cheering them on from afar.

There were fuel stops in five different countries. Their first airport was Groningen Airport in the Netherlands, followed by Inverness in Scotland and Reykjavic in Iceland. Next came Narsarsuaq in Greenland, which is known as one of the world’s most demanding airports because landing requires approach to the runway through a fjord, surrounded by mountains and glaciers.

Their final refuelling was at Goose Bay Airport in Canada, before heading due south to Barnstable Airport in Hyannis, Massachusetts, US., where they were greeted by enthusiastic Cape Air Executives, Founder & CEO Dan Wolf, President Linda Markham and James Goddard – Senior Vice President, Fleet Planning & Acquisitions.

The Tecnam crew members were kept constantly busy during the flight. In the air, they were hyper alert, flying around the weather in very tough and sometimes challenging conditions.  When on the ground there was no time to rest or eat, they were refilling fuel and filing flight plans and then getting back in the air as quickly as possible to take advantage of the weather.

Powered by two 375 HP turbo-charged Lycoming engines, the 11-seat Tecnam P2012 Traveller has a fuel capacity of 750 litres in the wings, but on this ferry flight — the longest ever for Tecnam — they carried an extra 450 litres in a collapsible ferry tank in the rear of the aircraft, significantly extending their range.

It was a very rewarding experience for the Tecnam crew, chasing the sun from one country to another, right across the world, with breathtaking landscapes and stunning topography along the way, especially crossing the Labrador Sea between Greenland and Canada. 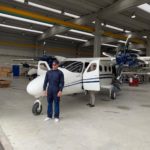 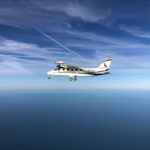 Flying to Scotland from Holland

the two birds preparing for the night in Inverness 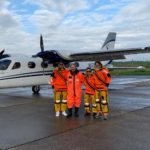 Before hopping to Iceland 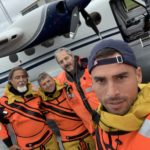 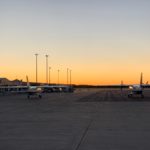 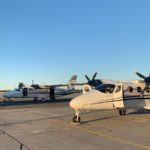 Parking brakes on at Cape Air Base 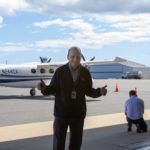 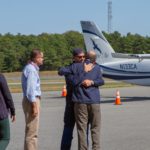 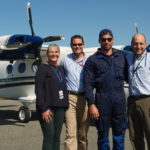