Tecnam today announced that the Dominican Republic Air Force (FARD) would be the first military operator of the Tecnam P2006T SMP (Special Missions Platform) aircraft.
The primary role for this P2006T SMP aircraft will be Countering Transnational Organized Crime (CTOC) and support the Dominican Republic Navy (ARD) and the Dominican Republic’s National Drug Control Direction (DNCD).
The contract signing ceremony took place in Santo Domingo, at the Dominican Republic Air Force Headquarters. It was signed between Major General (DEM) General Commander of the Dominican Republic Air Force, Elvis M. Felix Perez, FARD and Walter Da Costa, Tecnam Global Sales and Marketing Director.
Both Walter Da Costa and Tecnam COO Giovanni Pascale Langer representing the Tecnam SMP team, expressed delight in the extensive interest shown by so many potential customers in the SMP program, so soon after the formal launch earlier this year.
Delivery of the FARD P2006T SMP is due in early 2016 at the Tecnam USA Inc. facility in Sebring, Florida
The Dominican Republic Air Force Tecnam program is an agreement between the Dominican Government and the United States Government represented by the US Southern Command. The Dominican Government will operate the aircraft whilst the US Government will provide and install a range of special surveillance equipment onto its first Tecnam P2006T SMP aircraft to support CTOC operations on the Caribbean region.
The Tecnam P2006T SMP has been designed to support a wide range of special missions and applications, such as search and rescue, reconnaissance, immigration surveillance/border patrol, drug trafficking and law enforcement roles. It is fully able to replace, support or drastically reduce the use of far more expensive/much-complicated assets such as the deployment of CS/FAR 25 airplanes, helicopters and coast guard boats.
Unbeatable value, low ownership, operating/maintenance costs (less than 0.3hr/flight hour) coupled with innovative design and combined with the Rotax ‘912S’ engine ensures the Tecnam P2006T SMP affords high mission reliability and dispatch as well as lower noise emissions.
      With a high payload capacity the Tecnam P2006T SMP may be equipped with a wide range of payload & sensors. This is primarily due to the flexibility of its metallic construction and fully EASA/FAA validated models, which allows modification(s) on the standard P2006T airframe.
Built to operate in challenging environments and semi-prepared strips, the Tecnam P2006T SMP benefits from extremely low take-off and landing runs (235 and 190mt respectively): the high wing keep the engines completely cleared from dust and any foreign object that could damage the propellers and the engine through the air intakes.
The P2006T SMP’s high wing and retractable landing gear allows for a ‘no view obstruction’ for external cameras and operator FoV (Field of View). This potentially may make the difference between mission success and failure especially when auto-tracking a moving object from high altitude. 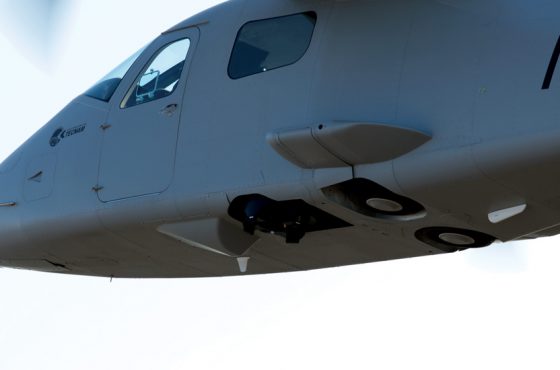 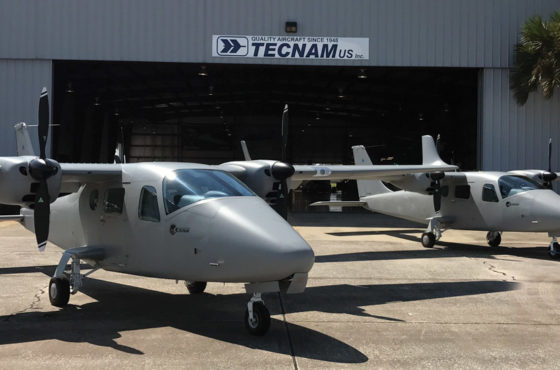